One of the most immediate areas of safety consideration for the Histotechnologist is in microtomy. Countless technicians over time, particularly those who have been in the profession long enough to remember a time before certain safety features were built in, can attest to the hazards of working on a microtome. So many of us have grim stories to tell of a past incident, with the ‘battle scars’ to prove it. Early design of microtomes had an exposed area of the knife or blade. Technicians improvised in many ways such as taking small tubing, cutting it longitudinally and placing it on both ends of the knife. Modern design has seen this safety hazard addressed along with other features such as: knife guard over cutting surface of blade, blade lock to keep it secure, a locking mechanism on the microtome sectioning wheel, and others.

Use of knives evolved for the most part to disposable blades, but they in themselves had safety improvements in design. Many disposable blade designs have a 45º angle on the cutting corners, however, manufacturers responded to some user’s requests to have rounded corners on the blades. Both are safe when used with proper handling techniques, but now technicians have an optional added safety design based on their preference. The packaging (casing) for the blades was also a concern with some designs. With some it was more difficult to eject the blade from the casing because of resistance, and in some instances caused injury when force had to be used to dispense a blade. Better designs led to ease of use (blade dispensing) being as equally important as blade performance. Modern blade casings were also designed to dispose of used blades in a disposal port on the dispenser. Smaller Sharps containers were designed to be placed in arms reach from the microtome to dispose of blades, discarded slides, and any other sharp items. At the grossing bench or table, safety has been manufactured into the design of large grossing knives via molded handles with finger guard for added safety against hand slippage during dissection.

My history in the field takes me back to a time when techs used Bunsen burners (can you imagine an open flame in the lab) to heat their forceps during embedding. Industry safety standards eventually made this a violation. Manufacturers responded by enhancing their embedding centers with multiple heating ports for your forceps to be placed in to remain hot; avoiding having carry over of caked on paraffin from one block to the next. Heated forceps were also designed, eliminating the need to continually heat up your forceps.. 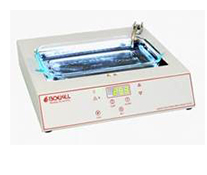 In past times and even still in some labs today, microtomists used lamps on their microtomes or next to their waterbaths. This helped provide extra light necessary to see and focus on block sectioning and section flotation on waterbath. Again, I reminisce at a personal story where a technician working in a cramped space accidentally knocked their lamp down into the waterbath. Instinctively they immediately reached and grabbed it out of the bath without thinking. Water and electricity; this could have been a ‘shocking’, even deadly experience. Fortunate for them it all happened so fast and there was no incident with the electric lamp. Manufacturers developed lighted waterbaths that have bright, back-light illumination allowing the user to have optimal visibility during tissue flotation.

Microwaves have been used in the Histology lab for years, particularly with some special stain procedures. Certain stains required the use of chemicals that emit caustic fumes. At best these microwaves were used under a fume hood, but quite often they were used openly right on the bench top in the lab. When opened the user was exposed to whatever fumes came out of the microwave cavity. Previously labs used an ordinary household microwave which had none of the design features necessary for the laboratory. One of the primary design features needed was some form of ventilation system that could continually extract the fumes from the cavity and have zero exposure to the user when opened. In the mid to late 1990’s, with the ardent work of professionals such as Gary R. Login, DMD, Maureen Doran, BA, HTL, and others, the National Society for Histotechnology formed a Committee on Clinical Laboratory Standards for Microwave Ovens to discuss and develop laboratory standards for a microwave unit and use. Soon after, the Clinical Laboratory Standards Institute (CLSI) produced an approved regulatory guideline titled, ‘Microwave Device Use in the Clinical Laboratory; Approved Guideline. This guideline made it a compliance standard that any microwave used in the Histology laboratory had the design and performance features listed within; one being that microwave units must have an internal fume extraction system to be used as a bench top item. The unit pictured here illustrates the fume extraction port of a lab designed microwave unit that would be connected to the laboratory air handling system.