In Part 1 of this series the emphasis was on basic personal safety practices that are so elementary that they are often overlooked.  In this second part our focus is on air quality and the ‘assumed’ environmental safety of the laboratory.  Because of chronic exposure to some common chemicals, histologist, particularly those that have worked in the environment for months if not years; those workers typically become sensitized to certain low-level vapors from formalin, xylene, etc.  They oftentimes lose their ability to smell lower exposure levels and do not smell or experience the symptoms associated with exposure.  What use to be detected by your olfactory senses is not detectable.  What used to cause nausea or irritation in breathing no longer gives discomfort.  This is how this area of safety monitoring frequently becomes an assumed acceptable environment for air quality.  Long-term exposure to even low levels of hazardous vapors can and most times do have a chronic cumulative effect on the respiratory and central nervous system.  It is for these reasons that the maintenance and monitoring of air quality is an absolute mandate in the Histopathology laboratory.

Most histopathology laboratories that have a daily or even frequent workflow, have implemented multiple monitoring measures to ensure the air quality/safety of their employees.  In doing so, one of the first targets should be individual direct exposure monitoring.  One technologist may have work assignments that require higher exposure frequencies than others.  For example, we often have lab assistants or even technologists handling the duties of changing the tissue processors and staining machines.  Their exposure to xylene and/or formalin will be much higher than a technician who is primarily involved in microtomy. Accessioning personnel may have no exposure at all. Therefore, it is important to do individual assessments. Annual assessments via vapor monitor badges affords the laboratory the safety assurance for each worker, as opposed to only a focus on the general lab environment; and it provides a validation document for compliance with your regulatory safety monitoring systems. Badges are typically worn for 24-hours as part of your normal attire during your workday, then can be turned in for analysis. Once again, direct, individual assessment and very cost effective.

The second consideration should be the most immediate air environment (within 10 ft. of designated workspace). The Air Filtration System shown here has a small footprint of 13” in diameter by 24” in height. It can easily be placed on a benchtop or shelf and can clear an air volume of as high as 195 cubic ft./minute or as low as 95 cf/m. It is quiet and is designed to run continuously with interchangeable filters to reduce exposure to alcohol, xylene, and formalin. It is perfect for small specimen grossing stations, special staining areas, and coverslipping, or even just general bench-space. 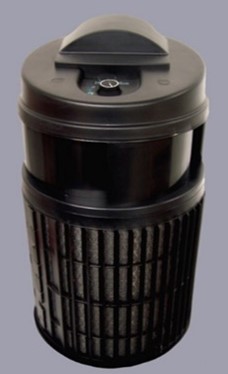 The last immediate consideration should be the areas of the highest air contamination, such as processing rooms, grossing stations, and waste containment areas. Xylene vapors are heavier than air and thus will concentrate at the floor level, increasing the understanding that vapors could be considerably higher at knee-level or below. Vapors may not be as detectable when using vapor monitor badges which are placed at the chest level.  Working in a seated position, such as in histology when performing microtomy, embedding, or coverslipping, will be at higher exposure levels than when standing. Portable Fume Extractors, such as the two units shown below, have a higher capacity of fume extraction due to their size and directional focus advantage. The flexible single or double hose extension(s) are 5 ft. in length and can be focused on areas such as corners or immediately next to equipment emitting fumes. They can be placed on the floor, benchtop or wall mounted, given there is enough space to accommodate a larger unit. As mentioned, these units are usually designed for the areas or rooms with the highest vapor exposure.

Regardless of whether it be by badges, air filtration systems, fume extractors, or all three, managers must do more to enhance and maximize the monitoring and control of air quality safety. Employees are a precious commodity that, no matter how automated your laboratory is or isn’t, must be protected and assured that the corporation will provide a safe environment for them to perform the required duties of service. Simple general air quality measurements that are limited to someone walking through the lab with a detection wand are not enough. Laboratory leaders must commit the necessary resources and funding to do the maximum and not the minimum when it comes to safety. For companies/laboratories, their customer is not just the patients, it is equally if not more, the workers.